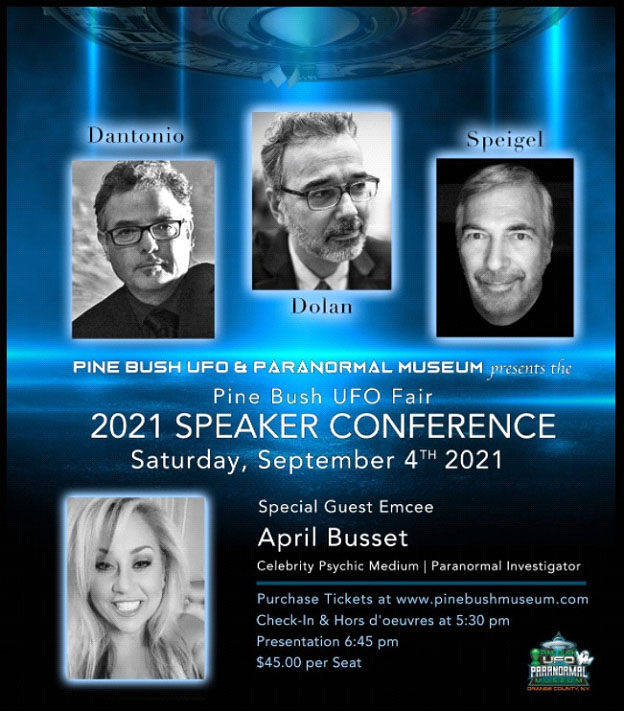 Lee Speigel has presented credible, compelling stories about UFOs, Science and the Paranormal to the public since 1975, when he produced a documentary record album, “UFOs: The Credibility Factor,” for CBS Inc. Between 1978-1986, he produced, wrote and hosted nearly 1,500 local and national programs on NBC Radio, dealing with UFOs and unexplained phenomena. In 1978, Lee became the only person in history to produce a milestone UFO presentation at the United Nations. Between 2010-2017, he was the chief Huffington Post writer of hundreds of stories crossing the fields of UFOs and Science. In 2020, he co-produced/co-wrote “The Phenomenon,” a thought-provoking, critically acclaimed UFO documentary from Director James Fox. Lee is currently co-producer, writer and host of “Edge of Reality Radio,” presented weekly over the KGRA Digital Broadcast Network and distributed by iHeart Radio.

Marc Dantonio is the Mutual UFO Network’s (MUFON) Chief Photo/Video Analyst and is CEO of FX Models, a company specializing in digital/physical models, and organic special effects in the film industry. His degree is in Astronomy and he specializes in the study of Exoplanets. He can be seen on various networks and TV Series discussing science and extraterrestrial life, or speaking at conferences around the country on the same topic. Currently he is creating remote UFO hunting systems with a team of top scientists to find all the answers. He is known for his work on Extraordinary: The Seeding (2019), Secret Space Escapes (2015) and The Proof is Out There (2021).

Richard Dolan is one of the world’s leading researchers and writers on the subject of UFO. He is the author of two volumes of UFOs and the National Security State, co-authored a speculative book about the future, A.D. After Disclosure, the first-ever analysis not only of how UFO secrecy might end, but of the all-important question: what happens next? Richard hosts a weekly radio show, The Richard Dolan Show, on KGRA radio, is a frequent guest on Coast-to-Coast AM. He is currently featured on several television series and documentaries, including Ancient Aliens, Hangar One: The UFO Files and Close Encounters. In addition to his research, Richard’s company, Richard Dolan Press, actively publishes innovative books by authors from around the world. His website is richarddolanpress.com